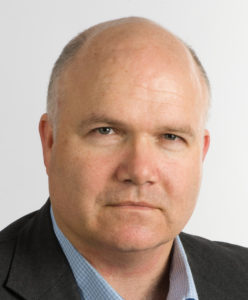 Mr Nicholas Maartens, principal at  Brain & Spine Surgery Centre is leading Australian Neurosurgeon. He works in private, has an academic public appointment at the Alfred Hospital and is a senior lecturer at Monash University.

After being awarded the Alec Brooke Scholarship he underwent medical school training graduating MBChB at the University of Cape Town SA. He undertook his surgical training at the Royal Postgraduate Medical School at Hammersmith in London UK, obtaining his surgical FRCS. He then undertook training as a neurosurgical registrar at the prestigious Radcliffe Infirmary in Oxford UK as one of the last registrars of renowned neurosurgeon Mr Christopher Adams.
During this time he worked extensively with Prof Peter Teddy and Prof Giles Brindley FRS, undertaking the equivalent of a pain fellowship, assisting in the implantation of the first brain telemeter.

He has been awarded the Ronald Tasker Award for pain management by the American Association of Neurological Surgeons. After obtaining a further FRCS fellowship in Surgical Neurology and being accredited by the Intercollegiate Royal College of Surgeons as a specialist neurosurgeon, he was then awarded a scholarship to undertake a pituitary skull base fellowship at the Virginia Health Sciences Centre in Charlottesville USA under Prof Ed Laws Jr, arguably the leading international pituitary neuroendocrine service.

In 2002 Mr Maartens was appointed as a Consultant Neurosurgeon at the Royal Melbourne Hospital and awarded an honorary clinical fellowship in the Department of Surgery at Melbourne University and  was afforded FRACS by the Royal Australasian College of Surgeons. He worked in the skull base team together with Prof Andrew Kaye and A/Prof Rob Briggs and was also responsible for spinal oncology. During this time he set up the multidisciplinary Pituitary Clinic. In collaboration with Prof Peter Colman, he introduced the Australian Pituitary Tumour database that has been adopted nationally. In 2011 he was invited to transfer to the Alfred Hospital and Monash University where he is now a consultant and a senior lecturer respectively.

Today Mr Maartens heads the Pituitary Neuroendocrine Service at the Alfred Hospital and is the director of the Melbourne Pituitary Neuroendocrine Service and Neuropaedia. He has undertaken more than 13 000 neurosurgical procedures, has published more than 50 peer reviewed articles - many in Neurosurgery and Journal of Neurosurgery and has authored more than 12 book chapters. He regularly presents both nationally and internationally.
He is both a general neurosurgeon specialising in complex and minimally invasive spine surgery, cranial microsurgery and is a specialist endoscopic skull base pituitary surgeon emphasisng a caring, evidence based approach to patient care.
He is affiliated to the William Buckland Radiotherapy Centre, neuro-oncology service at the Alfred Hospital where he is part of the brain and spine neuro-oncology team and where he leads the pituitary neuroendocrine surgical service.

Mr Maartens is accredited and performs his private surgeries at the following hospitals:

Mr Iwan Bennett is a Neurosurgeon specialising in the treatment of brain, spine and peripheral nerve conditions. .

His special interests include pituitary and skull base surgery.

Mr Bennett treats adult patients with a wide variety of neurosurgical conditions. These include:

​Patients are seen in our rooms  at the Brain & Spine Surgery Centre in Malvern, Melbourne. Telehealth appointments are also available.

​Mr Bennett is also registered to care for Workcover and TAC patients.

He is accredited and performs his private surgeries at the following hospitals:

Mr Bennett has a public appointment at the Alfred Hospital were he is currently the Acting Director of Neurosurgery.